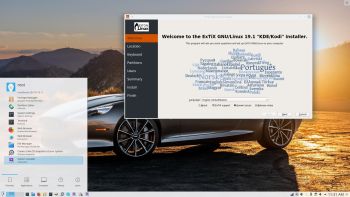 ExTiX 19.1 – Build 181228
I have made a new version of ExTiX – The Ultimate Linux System. I call it ExTiX 19.1 KDE/Kodi Live DVD. (The previous KDE version was 18.6 from 180602). The best thing with ExTiX 19.1 is that while running the system live (from DVD/USB) or from hard drive you can use Refracta Tools (pre-installed) to create your own live installable Ubuntu system. So easy that a ten year child can do it! As an alternative to KDE you can run Kodi 18 Leia. Just start Kodi like any other program while logged in to the KDE Desktop as the ordinary user extix. I have enabled a few addons in Kodi. Most important the Netflix addon.

ABOUT
ExTiX 19.1 KDE DVD 64 bit is based on Debian 9 and Ubuntu 18.04.1 LTS. The original system includes the Desktop Environment Gnome. After removing Gnome I have installed KDE Frameworks 5.44.0 with KDE 4.17. KDE Frameworks are 60 addon libraries to Qt which provide a wide variety of commonly needed functionality in mature, peer reviewed and well tested libraries with friendly licensing terms.

NEWS ABOUT ExTiX 19.1 Build 181228 with the KDE Desktop environment, Kodi 18, Calamares Installer and Refracta Tools
1. ExTiX KDE is based on Ubuntu 18.04.1 LTS Bionic Beaver. KDE 4.17 is used as Desktop environment. All packages have been updated to the latest version by 181228. Kernel 4.20.0-exton is used.
2. I have removed Google Chrome. It is now possible to watch Netflix movies in Firefox.
3. I have installed BlueGriffon Web Editor. BlueGriffon is a new WYSIWYG content editor for the World Wide Web. Powered by Gecko, the rendering engine of Firefox, it’s a modern and robust solution to edit Web pages in conformance to the latest Web Standards. Only to be compared with Dreamweaver. (In my opinion).
4. Other included important/useful packages are: Kodi 18, GParted, Brasero, SMPlayer, GCC and other compilation tools so that you can install packages from source. Furthermore “all” multimedia codecs. Everything the average Linux user could wish for I would say.
5. The best thing with ExTiX 19.1 is that while running the system live (from DVD/USB) or from hard drive you can use Refracta Tools (pre-installed) to create your own live installable Ubuntu system. Very easy to do.
6. I have installed Calamares Installer as in my other ExTiX builds. Calamares is an installer framework. By design it is very customizable, in order to satisfy a wide variety of needs and use cases.
7. As an alternative to KDE you can run Kodi 18 Leia. Just start Kodi like any other program while logged in to the KDE Desktop as the ordinary user extix. I have enabled a few addons in Kodi. Most important the Netflix addon.

WHAT’S SO SPECIAL about ExTiX and especially the new version from 181228?
1. The ExTiX ISO’s are ISO-hybrids, which means that they can very easily be transferred (copied) to a USB pen drive. You can even run ExTiX from the USB stick and save all your system changes on the stick. I.e. you will enjoy persistence!
2. Another big improvement is that both ExTiX versions can run from RAM. Use Boot alternative 3 (load to RAM). When the system has booted up you can remove the disc (DVD) or USB stick. You’ll need at least 2 GB RAM to run ExTiX that way. Running from RAM means that the system will run faster than from DVD or USB stick. Everything will be superfast I would say!
3. ExTiX KDE is now more stable than ever. All packages have been upgraded to the latest version by 181228.
4. I’ve replaced kernel 4.15.0-23-exton with kernel 4.20.0-exton. Latest by 181228.
5. I have replaced Ubuntu’s installation program Ubiquity (live installer) with Calamares. You can also (still) use Refracta Installer. They work very well. I.e. a new user (your user) will be created during the installation process and you’ll get a chance to change root’s password. Just start any of the installers from the menu under System.
6. The best thing with ExTiX 19.1 is that while running the system live (from DVD/USB) or from hard drive you can use Refracta Tools (pre-installed) to create your own live installable Ubuntu system.
7. As an alternative to KDE you can run Kodi 18 Leia. Just start Kodi like any other program while logged in to the KDE Desktop as the ordinary user extix. I have enabled a few addons in Kodi. Most important the Netflix addon.
8. Nvidia proprietary Graphics driver 410.78 (patched for kernel 4.20) is pre-installed in ExTiX 19.1.

LOG IN to KDE
You can run ExTiX live as root (superuser) or as the ordinary user extix. Log in from Slim‘s Login Manager as root with password root or as extix with password live. After booting ExTiX 19.1 live (from DVD/USB) you will end up in KDE 4.17 logged in as the ordinary user extix. During a hard drive installation you will get the opportunity to create your own normal user. When logged in as extix you can use Sudo to become root. (Command: sudo su). NOTE: On certain computers it can happen that you end up in console mode when the boot process is over. Then just log in as root or extix and run the command startx. You will then enter X and KDE 4.17. This will most certainly happen if you use Boot alternative 3 (load to RAM). NOTE: While logged in to KDE as the ordinary user extix you can enter Kodi 18. Kodi work very well. Just add as many addons you like. For example Plex and Amazon Video. Netflix is already enabled. Just give your credentials – screenshot.

Install ExTiX to hard drive
Just start the install program Calamares Installer or Refracta Installer from the KDE Menu/System (Install from a live CD to your system). Then just follow the instructions. NOTE: If you want to install Grub as bootloader while installing ExTiX on a not UEFI-enabled computer you’ll have to replace grub-efi-amd64 with grub-pc. Just run the command sudo apt-get update followed by sudo apt-get install grub-pc before you start the install program Refracta Installer. NOTE: You can only use Calamares on UEFI-enabled computers.

Spotify
You may want to install Spotify in ExTiX. Just go ahead. It’s very easy. Follow this instruction for Ubuntu. When running ExTiX 19.1 live or from hard drive you can just install Spotify with the command sudo apt-get install spotify-client. Watch a screenshot when Spotify is running in ExTiX KDE.

Samba – Reach you Windows computers in your Network
Samba works very well in ExTiX KDE 19.1. Just start Konqueror and go to smb://workgroup. Your computers will be listed (if the network is named workgroup).

Important about Refracta
You can use the Refracta tools (pre-installed in ExTiX 19.1) to create your own installable Ubuntu 18.04.1 Live DVD once you have installed ExTiX to hard drive. I mean change everything and then create a whole new Ubuntu live system. Start Refracta from Menu >> System >> Create a live CD snapshot of your system. You don’t even have to install ExTiX to hard drive before you can use the Refracta tools. If you have plenty of RAM you can create a new (your own!) Ubuntu system while running ExTiX from DVD or a USB stick. Please note that the whole Refracta process (creating your new ISO) will only take 10 – 30 min! You’ll find the ISO in /home/snapshots. The whole thing is very simple. Watch a slideshow showing how easy it is to use Refracta Snapshot.

You can also download ExTiX 19.1 from the Swedish Linux Society.