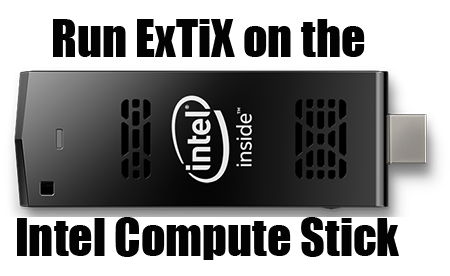 News 181020
Today I was about to make a new version of my ExTiX Build from 161203. I quickly learned that it isn’t necessary. It turns out that full support for the Intel Compute Stick is included in all kernels from version 4.11 until today’s releases (4.18). Kernel 4.8.0-26-exton-IntelAtom (which was used in my build from 161203) was patched – see below. Without patches it wouldn’t have worked. Today any Linux system can run on the stick. At least all Ubuntu versions from which I have experience. This means (of course) that all ExTiX flavors can run on the stick. The only thing to think about is that the Grub boot line has to be somewhat special – see below. Those of you who have installed ExTiX Build 161203 can just upgrade the system from 16.10 to 18.04.1 LTS and then install a new kernel. For example “my” Ubuntu kernel 4.18.12-exton. Open /etc/apt/sources.list with Leafpad and replace all instances of yakkety with bionic. Then run the command sudo apt update. After that you can upgrade the whole system using Synaptic. I have done it myself so I know it works.

NOTE 161203
Build 161119 – my first for the Intel Compute Stick – has been replaced by Build 161203. Some errors in the first build have been corrected. Occasionally crashes of Ubiquity when running the previous version of ExTiX (from161119) was the main reason for the new release. I.e. in Build 161203 Ubiquity (and everything else) will work as expected.

ABOUT ExTiX for Intel Compute Sticks
ExTiX 16.5 LXQt 64 bit for the Intel Compute Stick is based on Debian 9 Stretch and Ubuntu 16.10 Yakkety Yak. The original system includes the Desktop Environment Unity (Ubuntu). After removing Unity I have installed LXQt 0.10.0. LXQt is the Qt port and the upcoming version of LXDE, the Lightweight Desktop Environment. It is the product of the merge between the LXDE-Qt and the Razor-qt projects: A lightweight, modular, blazing-fast and user-friendly desktop environment.

NEWS ABOUT ExTiX 16.5 build 161203 with LXQt Desktop environment
1. ExTiX LXQt is based on Ubuntu 16.10 Yakkety Yak. LXQt 0.10.0 is used as Desktop environment. All packages have been updated to the latest version by 161203. Kernel 4.8.0-26-exton-IntelAtom is used. You can download it if you want to use it in another Ubuntu system which can run on the Intel Compute Stick.
2. Google Chrome is used as Web Browser, which makes it possible to watch Netflix movies. It is not possible in Firefox (in Linux).
3. I have also installed BlueGriffon Web Editor. BlueGriffon is a new WYSIWYG content editor for the World Wide Web. Powered by Gecko, the rendering engine of Firefox, it’s a modern and robust solution to edit Web pages in conformance to the latest Web Standards. Only to be compared with Dreamweaver. (In my opinion).
4. Other included important/useful packages are: LibreOffice, Thunderbird, GParted, SMPlayer, GCC and other compilation tools so that you can install packages from source. Furthermore “all” multimedia codecs. Everything the average Linux user could wish for I would say.

LOG IN to LXQt
You can run ExTiX live as root (superuser) or as the ordinary user extix. Log in from LXDM Login Manager as root with password root or as extix with no password. During a “hard drive” (SD card) installation you will get the opportunity to create your own normal user. When logged in as extix you can use Sudo to become root. (Command: sudo su). 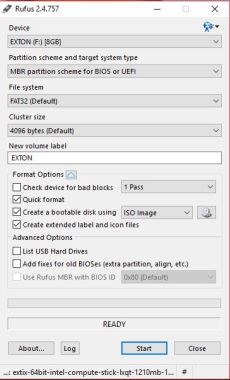 Changes in BIOS
To be able to boot from the USB stick with ExTiX you have to make two changes in the BIOS of the Compute Stick. Connect a keyboard first. (Your wireless keyboard won’t work in BIOS). Start up your Compute Stick and press F2. Change boot priority from Windows to Ubuntu like this. Then restart and press F10 to choose your USB stick with ExTiX on. It can look like this.

Screen resolution
Perhaps the screen resolution won’t be optimal. If you can’t reach the menu you can right click on the desktop and create a new folder. Then go to Applications >> Preferences >> LXQt Settings >> Monitor Settings and change to the resolution you want.

One way to use the Intel Compute Stick
I bought model STCK1A32WFCR with 2GB RAM and Windows 8.1 pre-installed on a 32GB SD card. About six months ago I upgraded to Windows 10, but I was never satisfied with the performance. RAM of 2GB is sufficient when running Linux, but not for Windows 10. So I removed Windows. Now I have Ubuntu 16.04 on the original 32 GB SD card and ExTiX 16.5 (Ubuntu 16.10) on an extra SD card of 64GB. I’m thinking of shrinking the partition for ExTiX to make room for other Linux systems. Testing, testing…
Grub is installed in Ubuntu 16.04. This is how /boot/grub/grub.cfg looks now in relevant parts.

Problems with Grub/troubleshooting
Did something go wrong? GRUB doesn’t show up? Here is a tip, which I learned from Liliputing.com.

1. Turn on the computer and hit F2 to enter the UEFI setup utility.
2. Enable the Internal UEFI Shell option, save, and reboot.
3. Now hit F10 when the computer boots, and select UEFI Shell.
4. Type the following command and press ENTER: FS0:
5. Type cd EFI\ubuntu and then grubx64.efi

IMPORTANT NOTE: You may NOT be able to use a wireless keyboard when running the above mentioned commands.

This should bring up the GRUB boot loader and give you the option to boot into ExTiX. If it doesn’t work or you only see a GRUB command line, you might want to reboot and try again. I can say that the above commands do work. (I have tried them myself). When ExTiX is up and running you shall run the following two commands:
sudo grub-install /dev/mmcblk1p1 (which is /boot/efi)
sudo update-grub
Before you run the command sudo update-grub you should edit /boot/grub/grub.cfg or (preferably) /etc/grub.d/40_custom to your liking.

Connect wireless
ExTiX uses NetworkManager. When you are logged in to LXQt it will pop up a window saying that there are networks you can connect to. Just choose yours, give your WEP/WAP password and connect!

Spotify
You can (of course) run Spotify in ExTiX. Just install Spotify with sudo apt-get install spotify-client. If it doesn’t work follow this instruction.

HBO
You can watch HBO movies in ExTiX on the Intel Compute Stick. Follow this instruction. HBO works unfortunately only with Firefox.

More information
If you need more information about how to install and use Ubuntu on Intel Compute Sticks a lot can be found on Linuxiums different sites. Also on many other sites.