NEWS 210106 ABOUT ExTiX Deepin 21.1
I’ve uploaded a new extra version of ExTiX Deepin, which has VirtualBox Guest Additions pre-installed. With those installed you can run ExTiX in full screen in VirtualBox. The additions couldn’t be installed while using kernel 5.10.4-exton. I had to install Deepin’s original kernel 5.4.50-amd64-desktop. In version 210106 I’ve also included Refracta Installer. Use it in VirtualBox if you want an exact copy of ExTiX Deepin installed. Before starting Refracta Installer you should run the commands sudo apt update followed by sudo apt install grub-pc. When asked install Grub in MBR. Watch a screenshot showing when the installation is ready.

NEW FUNCTIONS etc
1. You can run ExTiX from RAM. Use boot alternative 2 (load to RAM) or Advanced. A wonderful way to run Linux if you have enough RAM. Everything will be super fast. When ExTiX has booted up you can remove the DVD or USB stick.
2. You will have the opportunity to choose language before you enter the Deepin 20.1 Desktop. All main languages are supported.
3. I have replaced Deepin Installer with the Reborn version of Deepin Installer. Works better in every way.
4. I have replaced kernel 5.9.1-exton with kernel 5.10.4-exton. Corresponding the latest available stable kernel 5.10.4 from Kernel.org.
5. Spotify and Skype are pre-installed.
6. You can watch Netflix while running Firefox.
7. You can install ExTiX Deepin also in VirtualBox/VMware using Deepin Installer. (In previous versions you had to “chroot” into the install partition and install Grub).
8. As an alternative to Apt you can use the Cactus Package Manager. Example commands: cpm i mousepad and cpm s gimp. (Install Mousepad and search for Gimp). CPM works very well.
9. Install ExTiX to a USB stick preferably with Rufus 3.13 in Windows – see below how it looks. 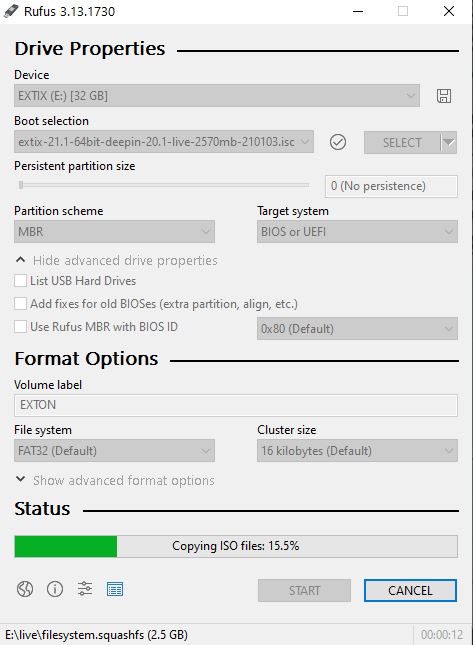 UNIQUE
I may add that there is no other live version of Deepin 20.1. 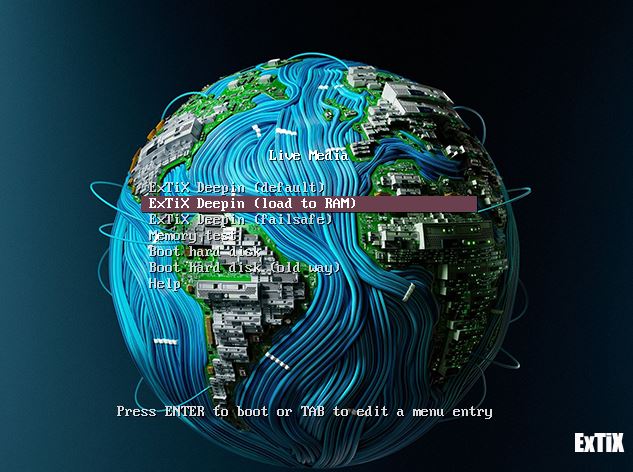 MORE NEWS 210103 ABOUT ExTiX Deepin 21.1
I’ve released a new version of ExTiX Deepin today with Refracta Snapshot and kernel 5.10.4-exton. Deepin 20.1 (latest version released 201230) is made in China. Deepin is devoted to providing a beautiful, easy to use, safe and reliable system for global users. Previous versions of ExTiX Deepin were based on Debian and Ubuntu. ExTiX 20.10 is a live build of Deepin 20.1, which is based on Debian Buster. All packages have been updated to the latest available version as of today. Study all installed packages in ExTiX Deepin 21.1 Build 210103. So ExTiX 21.1 is based on Deepin 20.1 and Debian Buster. I may add that there is no other live version of Deepin 20.1 (as far as I know).

Refracta Snapshot
While running ExTiX Deepin 21.1 live or from hard drive you can use Refracta Snapshot (pre-installed) to create your own live installable Deepin/Debian system. A ten year child can do it! Watch a slideshow below. (The slideshow is for ExTiX Budgie 17.7, but Refracta tools works in the same way in ExTiX Deepin). You don’t even have to install ExTiX to hard drive before you can use the Refracta tools. If you have plenty of RAM you can create a new (your own!) Deepin system while running ExTiX from a DVD or a USB stick. Please note that the whole Refracta process (creating your new ISO) will only take 10 – 15 min! You’ll find the ISO in /home/snapshots. (Or change that in /etc/refractasnapshot.conf – see above).

SCREENSHOTS
1. ExTiX Deepin 21.1 Desktop
2. Spotify is running
3. YouTube is running
4. ExTiX showing a Samba connection to a Windows computer
5. ExTiX running in full screen in VirtualBox (after VirtualBox Guest Additions have been installed)